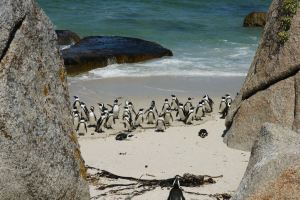 African penguins are an endangered species. It is projected that this species can become extinct in the next 10-15 years

One of my favorite animals at  Newport Aquarium is our African Penguins.  People love to see our penguins and since 2007 when we first brought African Penguins to the Aquarium nearly a million people have seen these birds, whether it has been “on the road” at special events and television interviews or the behind-the-scenes experience in our Penguin Encounter.  The penguins are great ambassadors and very popular.

However, African Penguins are an endangered species. We have watched a steady decline of the African Penguins since the late 1950’s when there were around 300,000 individuals in South Africa. In 2001, there were over 100,000 individuals and recently it has been estimated that there are less than 50,000 penguins left in their range country.  In October, 2010, the USFWS listed African Penguins as an Endangered Species. This species is only 2½% of what it was 80 years ago. It is projected that this species can be extinct in the next 10-15 years. We cannot allow this to happen.

Saving African Penguins
This spring, I was appointed by the Association of Zoos and Aquariums (AZA) to be the Program Coordinator for the AZA SAFE African Penguin Individual Identification Project.  For short, we’ll call it the “PIT tag Project”. Through a partnership of African agencies and AZA Zoo and Aquarium partners, the goal has been set to individually identify African penguin chicks and adults at selected colonies each year. Penguins set to be released from rehabilitation centers will also be tagged. Our goal is to tag at least 10% of the world’s population of African Penguins over the next 3 years. Essentially that will be around 5,000 birds tagged and identified in South Africa and Namibia. 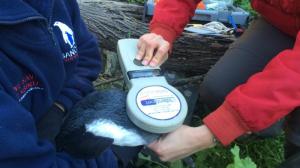 The goal of the PIT tagging project is to tag at least 10% of the world’s population of African Penguins over the next 3 years.

Once the African penguins are tagged, researchers will be able to identify individual birds with hand-held readers. Technology also allows us to track birds by using ground/strip readers which are installed near the breeding colonies which will provide continuous data collection. All this information will give AZA and the field biologists the data to develop the most effective programs to manage the colonies and other areas of African penguin conservation.

There are 50 AZA-accredited zoos and aquariums which house African penguins and many more house other penguin species. This creates a great opportunity for many AZA Members (keepers and veterinarians) who have experience handling and caring for these animals. With this valuable experience our AZA community is able to help with tagging penguins by sponsoring qualified individuals to travel to South Africa to participate in tagging programs.

The ‘tagging season’ for African Penguins in the colonies is from April through August.  This is the time that the penguins are molting and or nesting. With the ‘window of opportunity’ closing for this year, our project partners, the Maryland Zoo and Sea World San Diego, each had a staff member able to go to South Africa and participate in the first AZA SAFE PIT Tagging Team.

The rest of the year (September – March), the tagging is done in the rescue and rehabilitation centers when orphaned or injured penguins are brought into the facilities.  Once back to health, the birds are PIT tagged and released.

Our 2016 Inaugural AZA SAFE African Penguin PIT Tagging Team was selected from our Collaborating Partners.  On July 20th, Mike McClure from the Maryland Zoo and Kylene Plemons from Sea World San Diego set out to Cape Town, South Africa and 12 days with African Penguins. In South Africa, the AZA African Penguin Tagging Team will visit a couple of penguin rescue and rehabilitation facilities as well as collecting data in 3 penguin colonies; the Robben Island colony, the Boulder’s Beach colony and the Stony Point colony. 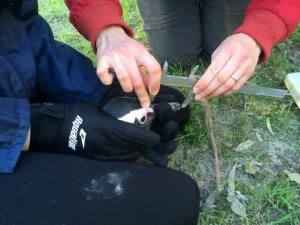 Every penguin receiving a ‘PIT” tag, will also be measured, weighed, blood drawn and feathers collected for DNA.

The first stop is in Table View, a community outside of Cape Town, which is the home of the South African Foundation for the Conservation of Coastal Birds (SANCCOB).  SANCCOB rescues, rehabilitates and releases hundreds of penguins and other seabirds each year. At SANCCOB, the AZA African Penguin Tagging Team received valuable instructions on how to approach and handle a wild penguin safely. The team was also trained on data collection on every penguin handled. Every penguin receiving a ‘PIT” tag, will also be measured, weighed, blood drawn and feathers collected for DNA. At SANCCOB, the Team meets Dr. Katrin Ludynia, field biologist for SANCCOB and the University of Cape Town. Dr. Ludynia will be their liaison for the trip since she is the primary researcher on the AZA African Penguin Tagging Project. 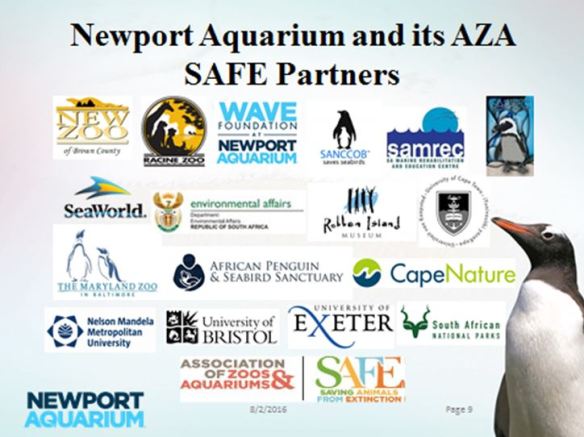