NEWPORT, Ky. — Opening weekend for Shipwreck: Realm of the Eels launches this Friday morning, March 6, 2020. The immersive new exhibit invites guests to explore the ruins of a long-ago sunken ship scattered across the sea floor, now home to hundreds of animals including mysterious eels, brightly colored fish and curious creatures as they thrive in this accidental reef.

New Exhibit Ceremonial Christening
In a fun opening ceremony, the aquarium will be christening the ship with a unique twist on tradition. Guests can witness Newport Aquarium’s Executive Director Eric Rose commission the remains of the ship at 10:30 a.m. on Friday by breaking a bottle across the wreckage.

“Let’s face it, we have fun jobs at Newport Aquarium,” said Eric Rose, Executive Director. “Our team has been working for years to bring this amazing new environment to life for guests and animals to enjoy. It will be like nothing else at Newport Aquarium.” Shipwreck: Realm of the Eels is one of the biggest developments since Newport Aquarium opened in 1999 and represents over a million-dollar investment in the guest experience. Guests will find new animals and an extensively themed environment to explore including walking into the treasure tank and popping up into a tank surrounded by venomous fish.

Shipwreck: Realm of the Eels features five zones, each with its own unique ship elements and animals to discover:

Shipwreck: Realm of the Eels features five zones. Each area has its own unique ship elements and animals to discover.

Captain’s Quarters: Rising up from the sea floor, the mast of the ship and tattered sails flow high above the remains of the captain’s quarters. A group of majestic green moray eels reaching up to 5 feet long have made their home there as masters of the ship. Nearby, the ship’s wheel awaits your turn as a fun photo opportunity with the eels and other residents including spiny lobsters and hundreds of fish.

Treasure Chest: The ship’s treasure was lost to the sea but has been found by beautiful jewel colored fish who now make the treasure chest their home. Step into their luxurious reef to be surrounded by 270 degrees of beautiful sea life and gleaming gold coins, a perfect spot to take a photo among the real treasures of the sea.

The ship’s treasure was lost to the sea but has been found by beautiful jewel colored fish who now make the treasure chest their home.

Cargo Hold: Fascinating animals thrive among the barrels and crates that held the ship’s cargo. Batfish walk along the sea floor on their fins, dozens of garden eels pop up from the sand and flow with the current while strange and colorful frogfish imitate corals as they await the approach of their next meal.

Ship’s Anchor: The ship’s anchor now plays anchor to a thriving community of fish and snowflake moray eels bearing white, black and yellow patterns that look like snowflakes. The eels share this safe spot with tangs, triggerfish, grouper and more. 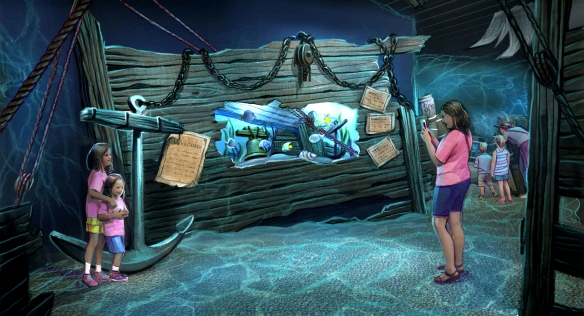 Ropes and Rigging: Enter the ship’s wreckage and pop-up into a dome to be surrounded by the ropes and pulleys that once held everything together. They now form a forest of protection for the animals that call it home. Find venomous and beautiful lionfish with their long flowing fins, spiny scorpionfish and the blackedge moray eel with its long fin running the entire length of its body.