With Easter just around the corner, it’s time to take a look at just how many eggs there are to be found at the Newport Aquarium! From shark eggs to turtle eggs, there is no shortage of the beginning stages of life here at the aquarium. As we go through our eggventure, we will be guided along the way by Scott, one of the biologists, as he shares fun facts and takes us behind the scenes for a look into the incubation rooms.  Scott has been with the aquarium for 19 years and is considered an expert on shark eggs. He was featured in a Takeover Tuesday blog post about Shark Central. 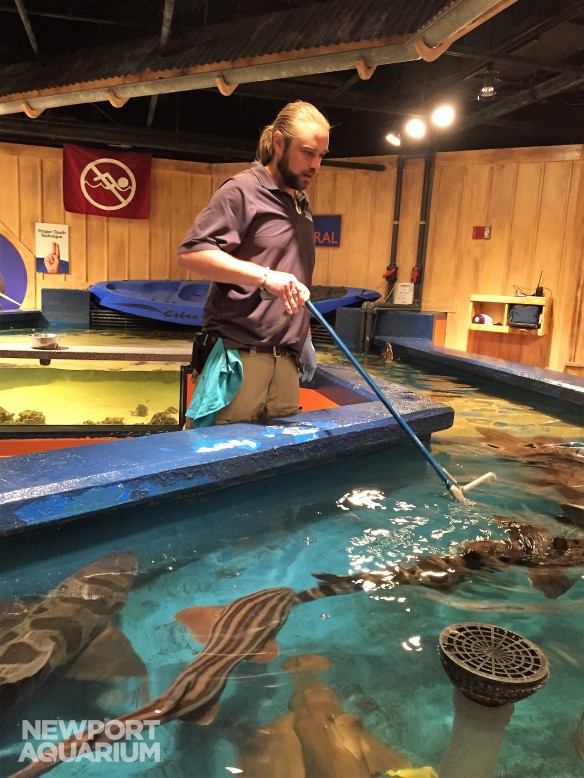 Aquatic Biologist, Scott, was featured in a previous blog post for Takeover Tuesday in Shark Central.

Starting off our eggtastic festivities are our Eastern Collared Lizards:

Fun Fact: Did you know collared lizards are the state reptile of Oklahoma?   Male collared lizards are identified by their bright blue and green coloration while females are a mix of gray and brown. You can find our Eastern Collared Lizard as you venture through Gator Alley!

Anthony’s Poison Arrow frogs are currently listed as near threatened by the IUCN. When females lay their eggs, they usually lay them on the floor of their environment, or on a large leaf.  This is when the male’s role as a parent becomes prominent.  It is now his job to guard the eggs until they hatch.

The beginning stages of life for a Port Jackson shark look just as unique as they do fully-grown. Port Jacksons are oviparous, which means that they lay eggs instead of giving live birth.

Leopard Catsharks are one of the few species of sharks that lay eggs.  In the picture below, it appears as though the catshark is asleep or possibly even dead, however that is not the case.

The catshark is actually in the process of laying her eggs, which come out in twos. When they lay eggs you will notice that there are curly tendrils on each end of the pouch, known as a “mermaid purse”. The tendrils assist in anchoring the egg which secures it to the ocean floor.

Leaf tailed geckos hail from Madagascar. They are currently listed as vulnerable by the IUCN and are considered a vanishing species.