NEWPORT, KY— In honor of National Frog Month, let’s meet some of our smallest and most colorful amphibians at Newport Aquarium—the frogs in Frog Bog!

There are 16 species of frogs on exhibit right now—see if you can find them all during your next visit! (Hint: one elusive species can only be discovered by your kids when they explore the Climber play area!)

All toads are frogs, but not all frogs are toads.

It’s easy to get these confused! Frogs and toads are closely related amphibians, but there are some differences! For example:

Now, let us introduce you to the residents in Frog Bog! 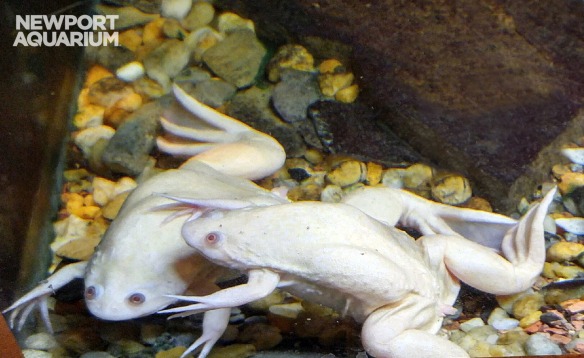 Your kids can discover these frogs when they crawl through the Climber in Frog Bog.

Albino African Clawed Frogs are from South Africa. They came to the U.S. in the global pet trade, spreading a deadly fungus called chytrid to amphibians around the world.

African Clawed Frogs are named for the tiny claws on their back feet that they use to push themselves along the bottom of ponds and slow-moving rivers. 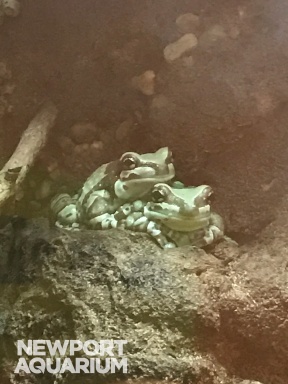 Amazon Milk Frogs secrete a milky-white poison, but their insides (including inside their mouths!) are green! 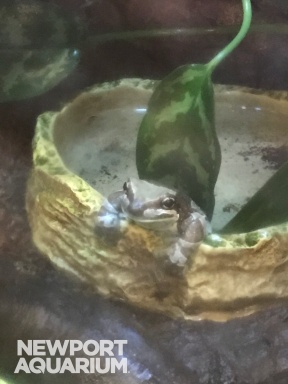 Amazon Milk Frogs are native to the rainforests of Ecuador, Peru, Brazil, Surinam, and Guiana.

They are incredible acrobats, and can grab onto a branch with a single toe! 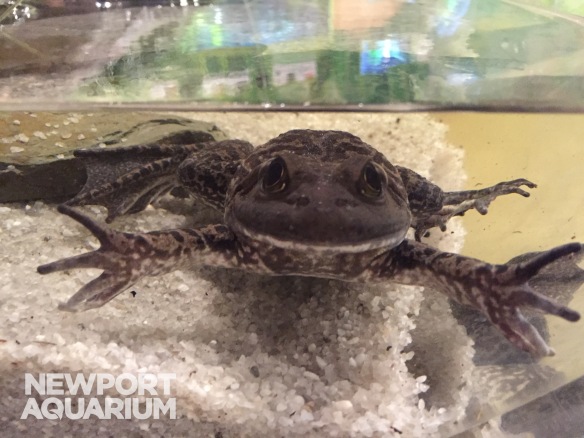 Our American Bullfrogs love to snack on nightcrawlers! Our frogs will only eat insects that are alive and moving, just like in the wild.

You may have spotted these North American frogs locally! They’re found in freshwater across the United States.

Unlike most frog species, you can tell an American Bullfrog’s gender by its ears—if the ear is the same size as their eye, then it’s a female, but if the ear is bigger, it’s a male! (For most frogs, you have to look at the size of their toes—males may have larger thumbs or pads. Also, only male frogs call, so listen up to tell the gender!) 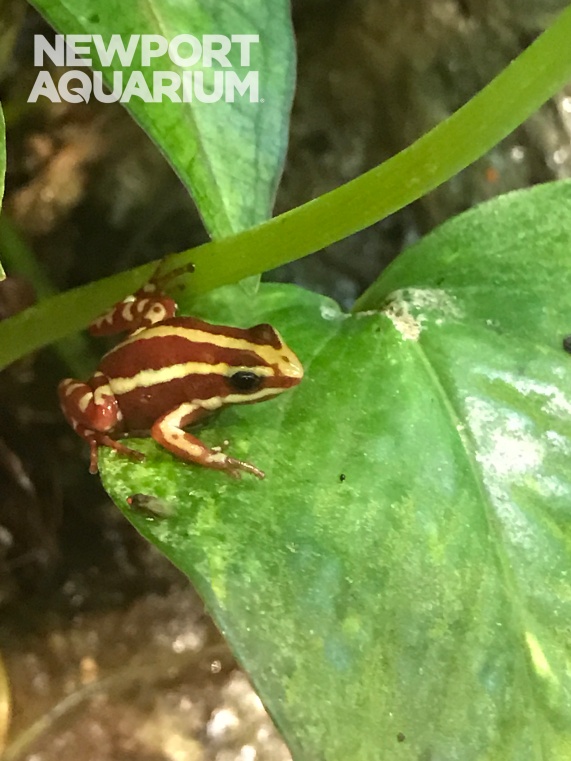 Try to find the Anthony’s Poison Arrow Frog tadpoles in Frog Bog right now! It takes about 10 weeks for these baby frogs to grow from tadpole to froglet.

Anthony’s Poison Arrow Frogs are found in subtropical forests in Ecuador and Peru.

Their skin secretions are studied by scientists for use as powerful pain killers! Other types of dart frogs have secretions that are used in medical research, too, as heart and neurological medications. 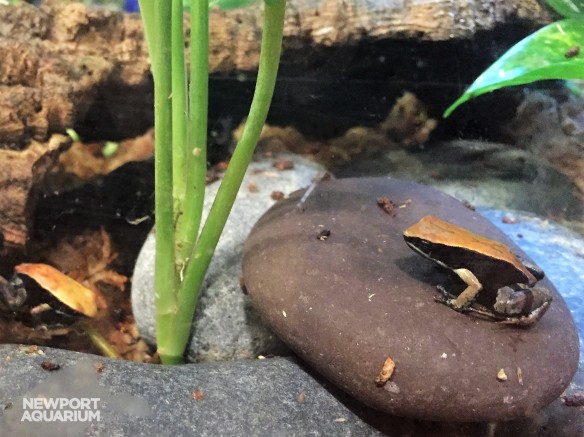 Brown Mantellas live in the forests and savannas of western Madagascar.

The males guard their eggs as the tadpoles develop. 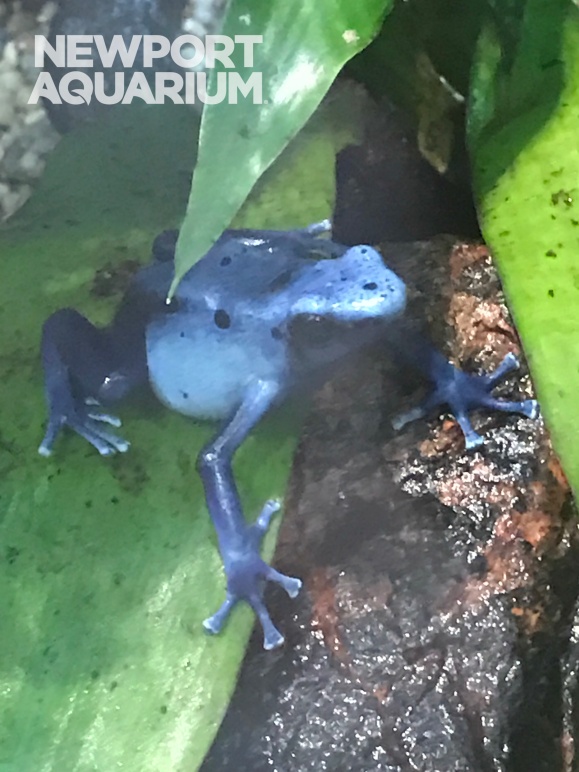 Poison dart frogs are only poisonous in the wild, because of the ants and other insects they eat. Here at the aquarium, they’re fed non-poisonous bugs!

Blue Poison Dart Frogs come from Suriname, and tend to live in the leaf litter on the forest floor.

As tadpoles, Blue Poison Dart Frogs will eat their own siblings! To avoid this, their parents have to find a different water source for each hatchling. 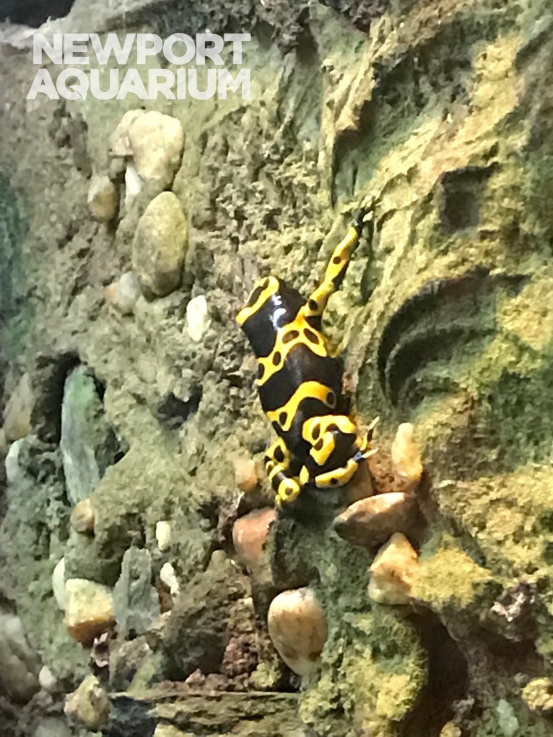 They hibernate during the dry season in the wild. Other species “semi-migrate” to find oases and rivers to wait out dry seasons.

Colorado River toads are the largest species of toad native to North America. They are found in the Sonoran Desert (arid to semi arid grasslands). They are primarily active during summer rainy season and hide from the hot sun during the day. They even burrow down into the soil to find moisture and protection from the sun. 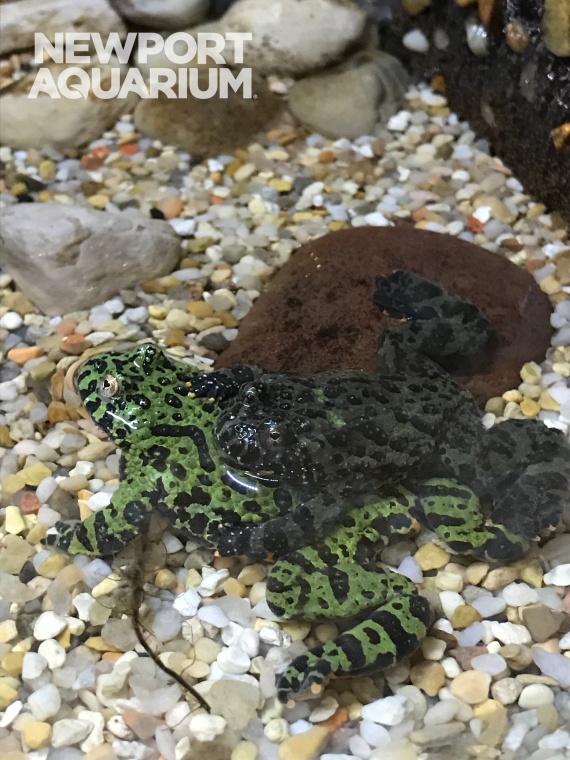 Fire-Belly Toads are named for their red bellies, which they flash to warn predators of their poison.

Fire-Belly Toads are native to the coniferous forests of China, Korea, and southeastern Russia.

Unlike their poison dart frog cousins, Fire-Belly Toads do not secrete poison from their skin. They carry poison in sacs behind their eyes. 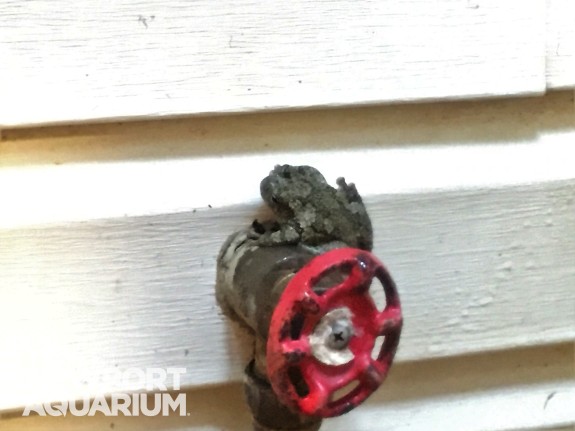 The Gray Tree Frog is rather shy, and its coloring helps it to camouflage with its surroundings—see if you can spot one in Frog Bog!

Gray Tree Frogs can be found locally—even in your backyard!

They can be found in moist, wooded areas, and their coloring changes to blend in with tree bark. 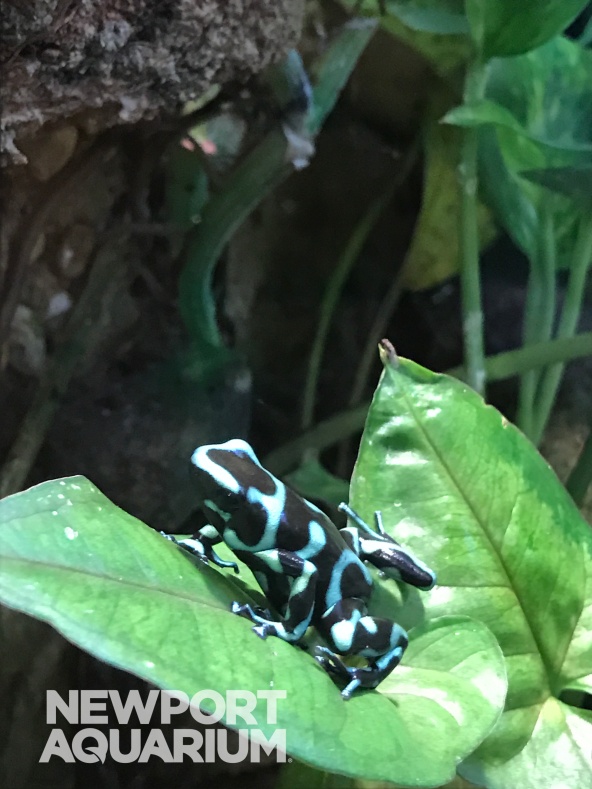 Like all poison dart frogs, Green/Black Poison Dart Frogs are brightly colored to warn enemies of the poison that they secrete.

The Green/Black Poison Dart Frog hails from the tropical rainforests of Central and South America.

Newly hatched Green/Black Poison Dart Frog tadpoles ride on their dad’s back to the nearest pond for them to grow up in. 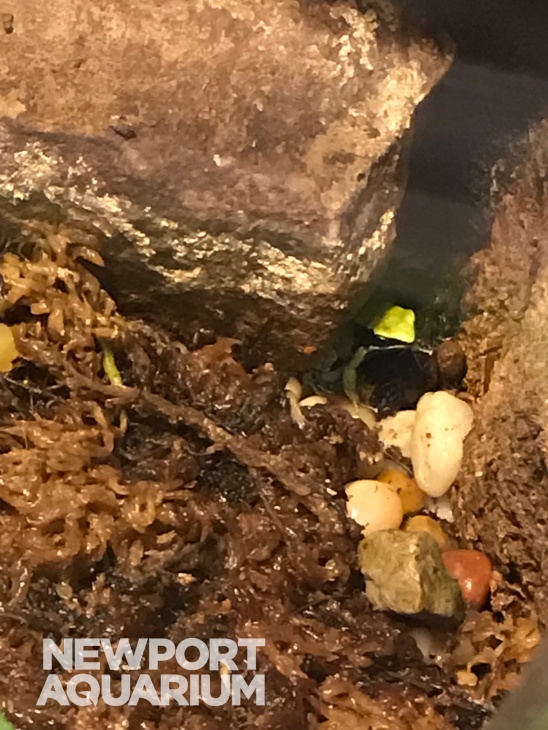 Though a little shy, see if you can spot these tiny Green Mantellas peeking up at you in their Frog Bog home.

Green Mantellas live in the extreme north of Madagascar, usually in dry lowland forest near streambeds.

Mantellas are the poison frogs of Madagascar 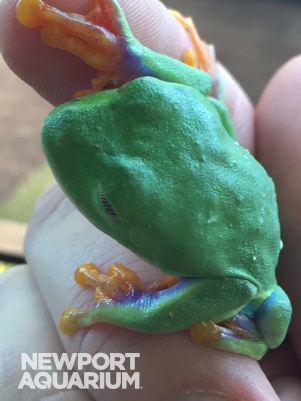 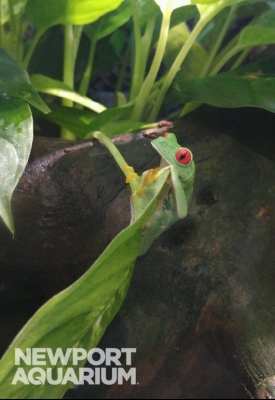 They have blue arms and legs, red eyes, and stripes on their sides to warn predators. 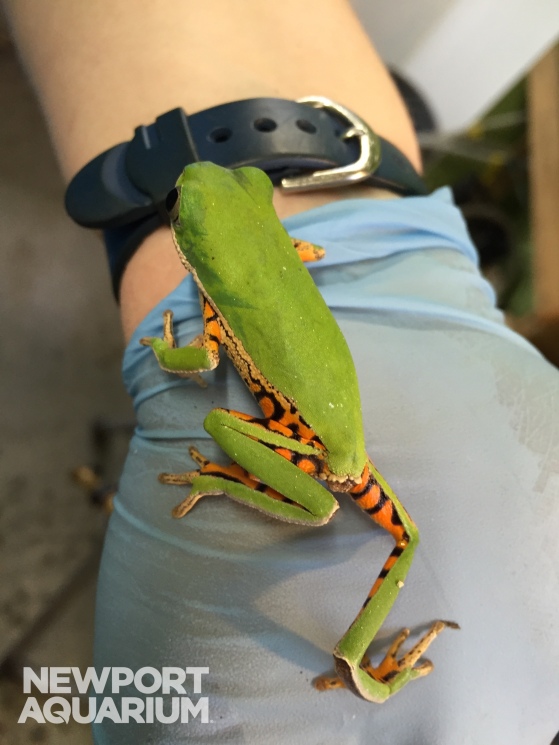 Tiger Leg Monkey Frogs are nocturnal, so they may be sleeping when you visit them!

They can change color based on their emotions and surroundings—so you may see a green or a brown frog on exhibit depending on their moods! 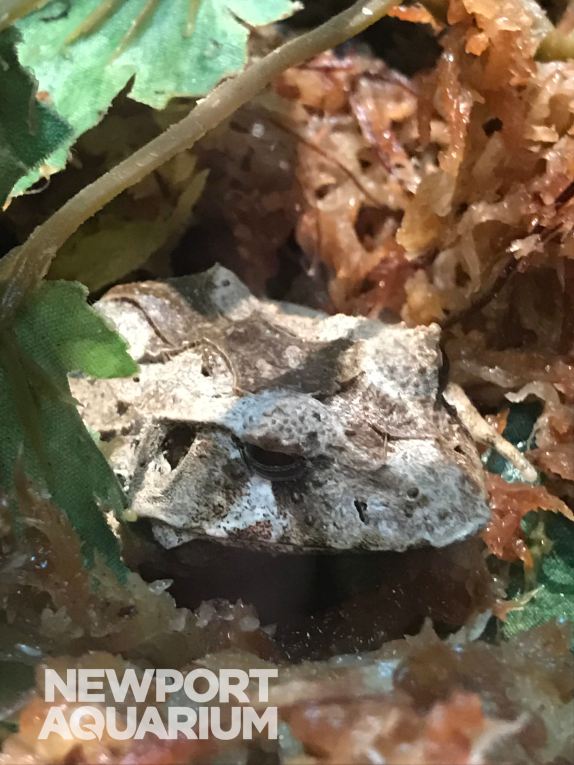 Unlike most frogs, they do not have a tadpole stage! When their eggs hatch, they emerge as fully developed small frogs!

And last but not least… 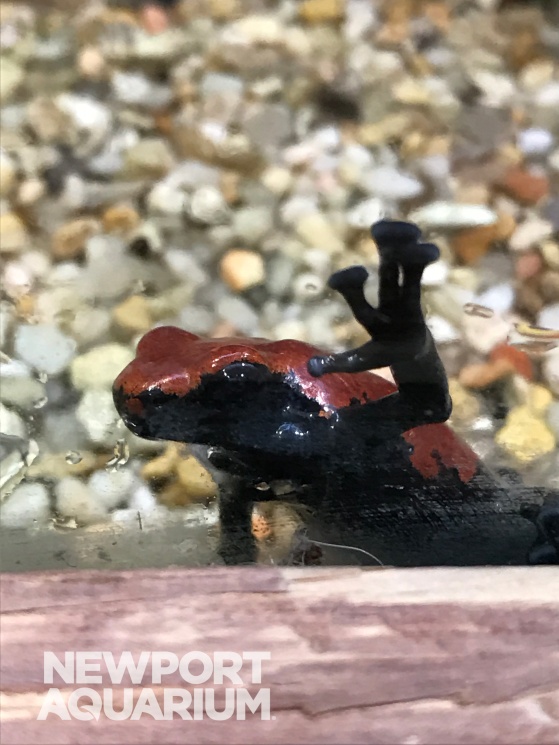 Say hello to the Splash-Backed Poison Dart Frog in Frog Bog! You can often see them using the suction pads on their toes to climb up the glass!

These bright red frogs are found in the rainforests of Brazil.

They are very social frogs, unlike most poison dart frogs, and prefer to live in small groups. You’ll probably see a group of them together!

Jump In and Help Us Protect Frogs!

How can you help protect frog and other amphibians?

Hop over to Frog Bog on your next visit to Newport Aquarium to learn more about ways you can help protect frogs and amphibians during National Frog Month and year-round!