It’s #TakeoverTuesday! Thanks for joining me, I’m Ty. I’ve been working here at Newport Aquarium for about 3 years. I moved here from Texas where I worked at the San Antonio Zoo as an aquarist. My favorite aspect of this job is propagation and culturing. I enjoy watching things grow and see something that was once nothing, grow into something. 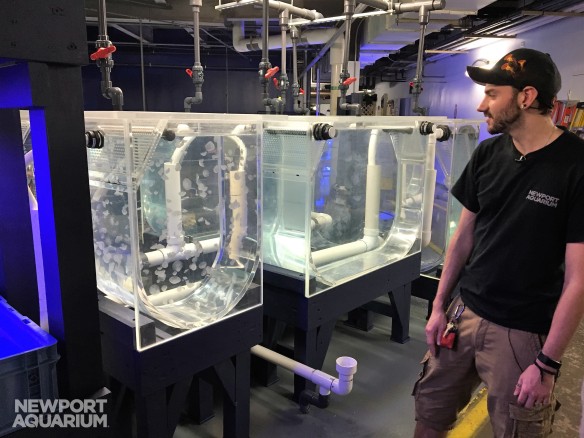 Behind-the-scenes with our jellyfish nursery.

Octopuses have been known to form attachments and bonds with their keepers. We try to spend as much time as we can with Simon. He can taste with his suction cups. Octopuses have as many 240 suction cups in each arm.

All GPOs (Giant Pacific Octopuses) are different and have different characteristics and personalities, so forming these relationships helps us understand the specific needs and behaviors of the individual. Also, it’s fun!

Octopuses have as many 240 suction cups on each arm.

Octopuses have many well-adapted senses. One unique way they sense is through taste, but octopuses don’t use a tongue to taste, instead they use suction cups. Each suction cup on an octopus arm has taste receptors that allow the animal to taste its surroundings. This helps to not only identify food, but also understand his surroundings, and to identify objects. They can even tell the difference between people using this adaptation, and can tell who they are interacting with based on that persons individual taste.

GPOs are extremely intelligent animals so providing daily stimulus and activities is critical to the animal’s health. We provide different forms of enrichment, all are in the effort to bring out the animal’s natural behaviors as well as to keep the animal entertained and healthy.  We introduce things like common tools used to clean the exhibit, offering him a chance to feel different textures and get used to recognizing the different items we use on the exhibit. This helps him to recognize these tools and learn that they are not a threat. We also use toys, and puzzles to keep the GPO’s mind occupied and stimulated. We use things like hamster balls with food inside and allow the octopus a chance to figure out how to get to the food. This gives the octopus a chance to problem solve, with the end reward of a nice treat. 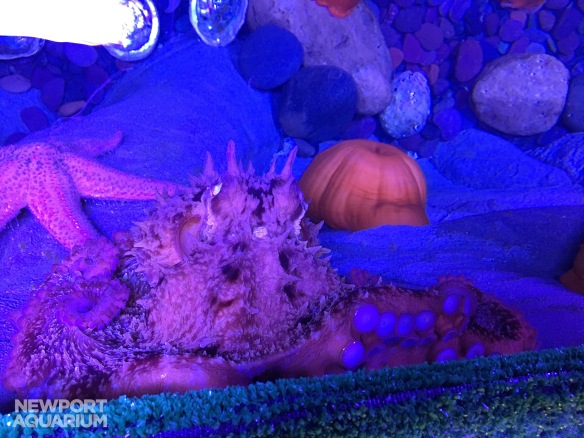 Here’s a closeup of Simon, the octopus, and what looks like a pumpkin at the bottom of the tank. But that’s a plumose anemone.

The hamster ball is a form of enrichment, it has a piece of shrimp inside it.

Sometimes you will see what looks like a pumpkin on exhibit. These are not pumpkins, but anemones. The plumose anemones on exhibit will look like giant pluming flowers when open with their arms extending to collecting any passing food. Once they collect the food, they will retract their arms and bring that food to their mouths and start to digest. That’s when they stop looking like flowers and more like a pumpkin. They will also retreat into this ball form when agitated as a way to protect themselves.

When you’re not looking at the octopus, you might notice several species of sea star crawling around the tank. Using what are called ‘tube feet,’ they slowly crawl around looking for any food items that might be hiding around. Like the octopus, these tube like feet have suction cups at the end of them that allow them to taste their surroundings and stick to objects. 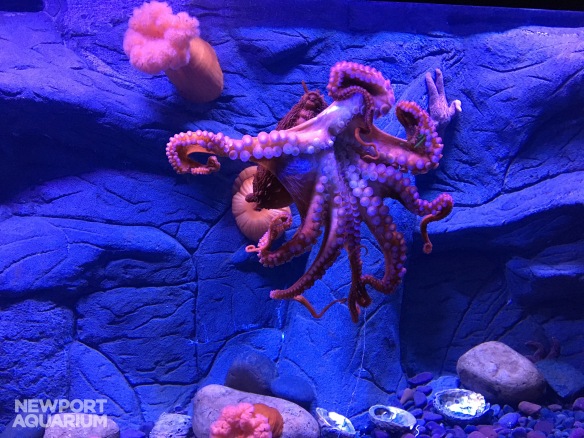 Simon like to move across the front of the tank. Octopuses are nocturnal, but he’s active in the morning, after he’s fed.

Another fun fact… The way you can tell a male from a female octopus is by looking at its arms. With male octopuses, the 3rd arm on the left side of body is smaller and has no suction cups at the end.

Thanks for joining me for this #TakeoverTuesday #WorldOfTheOctopus 🐙 edition!

1 thought on “Takeover Tuesday: World of The Octopus Edition”