After spending the last year at Newport Aquarium, Shack, the rescued loggerhead sea turtle is making his way back to North Carolina, and will be released back into the ocean this week. Shack came to Newport Aquarium last October, as a part of the North Carolina Sea Turtle Project. He was rescued as a hatchling on the beach along Shackleford Banks in North Carolina. 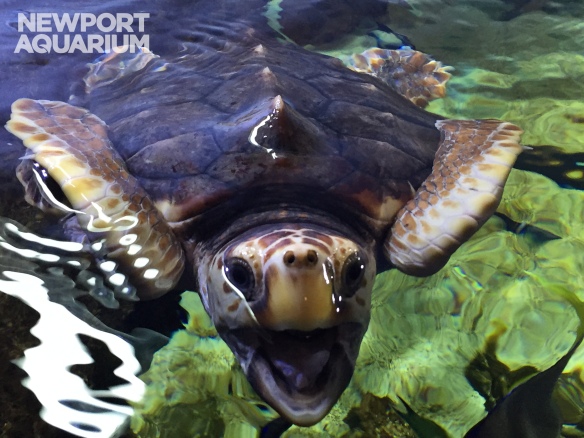 Shack, therescued loggerhead sea turtle is ready to return to the ocean. 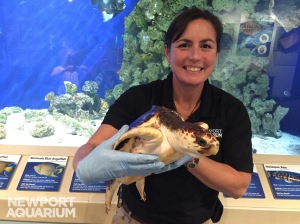 One final picture in front of the saltwater tank near Shore Gallery. Biologist Jen Hazeres spent the last year raising Shack, and preparing him to return to the ocean.

“We travel to North Carolina every fall to release the previous year’s hatchling and pick up a new sea turtle that needs our help,” said Newport Aquarium Senior Biologist, Jen Hazeres who will be joined by Newport Aquarium Water Quality Specialist, Cameo Von Strohe. This week, they will meet up with teams from several other facilities to release the sea turtle “yearlings” back into the ocean. And they’ll return with a new hatchling to raise over the next year.

Ready for the ocean

In preparation to bring the yearling sea turtle back to North Carolina, Hazeres gave Shack one final check-up. She prepped his shell and rubbed an ointment on his head and shell. She also applied a salve on his eyes to keep them moistened.

A lubricating ointment is rubbed on Shack’s shell to prepare him for the trip back to the ocean.

Hazeres applies an ointment to Shack’s eyes to make sure they’re moistened.

Stay tuned for updates as Hazeres and Von Strohe visit the site in North Carolina and rescue a new hatchling.

To learn more about how you can help, see our previous post: https://aquariumworks.org/2016/05/20/endangered-species-day-rescued-loggerhead-sea-turtle-enters-new-tank/