The rare shark rays born earlier this year made their official public debut today in the Coral Reef. This is the first time the public has gotten the chance to see them. The 60,000 gallon Coral Reef habitat is similar to their native surroundings in the Indo-Pacific. 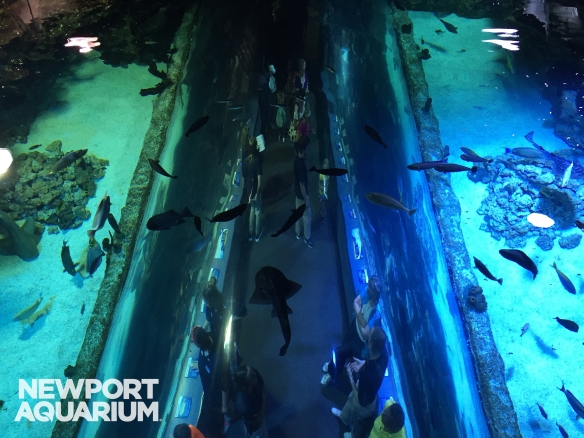 Shark ray pups explore the Coral Reef. The 60,000 gallon Coral Reef habitat is similar to their native surroundings in the Indo-Pacific.

Newport Aquarium is proud of the work of the team of biologists taking care of the pups since they were born in January. 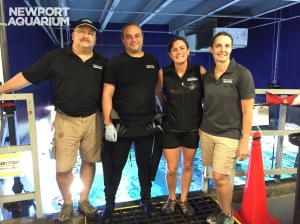 Part of the Animal Care Team: Mark Dvornak, Scott Brehob, Jen Hazeres, and Jolene Hanna – standing in front of the top of the Coral Reef tank after moving the shark ray pups into the tank.

“The whole Husbandry Team is a massive support,” said Jolene Hanna, Newport Aquarium Animal Health Specialist. “Everyone has their own sub-set of talents and life experiences to share.”

The pups have reached several milestones since birth. The pups range in weight from 10 to 13 pounds and they’re around 2.5 feet long. At birth, the pups’ weight ranged from 2 to 2.4 pounds and 18 to 22 inches long.

“They’re intelligent animals, they start to recognize who is with them all the time,” said Jen Hazeres, Senior Biologist. “There is so much more to learn from them.”

Shark ray pup swimming with Dory – exploring the surroundings in the Coral Reef.

Hazeres and Hanna are part of the Animal Care Team that closely monitors the pups and attends to every need. This has been a long journey for the biologists and they continue to learn from the pups and each other every day.
“They’re intelligent animals – they’re very aware of you and their surroundings,” said Hanna.

Shark rays are an amazing species with unique characteristics. The Coral Reef habitat gives Newport Aquarium guests an opportunity to get eye to eye with the shark ray pups. 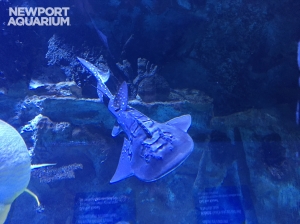 Get eye-to-eye with the shark ray pups as they swim overhead in the Coral Reef tunnel.

“We’re still learning about this species – so little is known about them in the wild. By having them here, under professional care, we’re learning their growth rate and so much more,” said biologist Scott Brehob.

With the debut of shark ray pups in the Coral Reef, Newport Aquarium is happy to kickoff the Summer Family Hours Special.

2 Kids Get In Free!
Families can make a splash this summer with Newport Aquarium’s Summer Family Hours Special – for tickets purchased online only. Now through September 2nd, up to two kids get in for free after 4 p.m. with each adult paying full price Sunday through Friday from 4:00 p.m. – 7:00 p.m. Purchase tickets at www.newportaquarium.com.