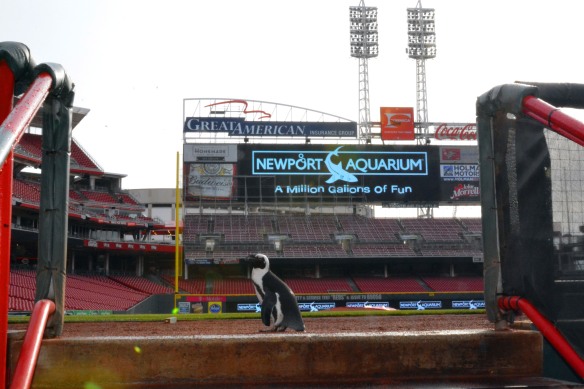 NEWPORT, Ky. — In time for Opening Day, Newport Aquarium and the Cincinnati Reds are teaming up to provide Reds Country with exclusive promotions, along with one very special animal encounter, throughout the 2015 baseball season.

This distinctive partnership will allow baseball fans and animal lovers of all ages to experience the thrills of two of Greater Cincinnati’s jewel attractions.

Paula the penguin will deliver the game ball at Great American Ball Park during pregame ceremonies on April 12.

Paula the Penguin Game Ball Delivery: Newport Aquarium’s Paula the penguin will deliver the game ball to the Great American Ball Park pitcher’s mound during pregame festivities prior to the Reds’ afternoon matchup against the St. Louis Cardinals on April 12, the first Sunday home game of the 2015 season. Following first pitch at 1:10 p.m., the famous African penguin will greet fans at the Kroger Fan Zone before participating in a Reds Heads Kids Club Q&A session at the Wiffle® ball field during the third inning.

(*Prices subject to change without notice)