The massive ragged-toothed shark will be the cornerstone of an aquatic-marine-life-themed mural to be displayed on the Newport Aquarium exterior wall facing the Ohio River in celebration of the aquarium’s 15-year anniversary.

The #SharkWall will be produced by ArtWorks as part of the Cincinnati-based nonprofit’s 2014 Public Art campaign.

“Partnering with ArtWorks for this project provides a great opportunity for local youths in the Greater Cincinnati and Northern Kentucky communities to showcase their artistic talents while developing their professional and life skills,” said Newport Aquarium VP/Executive Director Eric Rose. “The SharkWall is another example of Newport Aquarium’s continuous efforts to engage the community and we believe it will spark interest in marine aquatic life and conservation.”

With heights up to 35 feet and spanning more than 300 feet in length, the #SharkWall is ArtWorks’ longest mural project in the organization’s history. 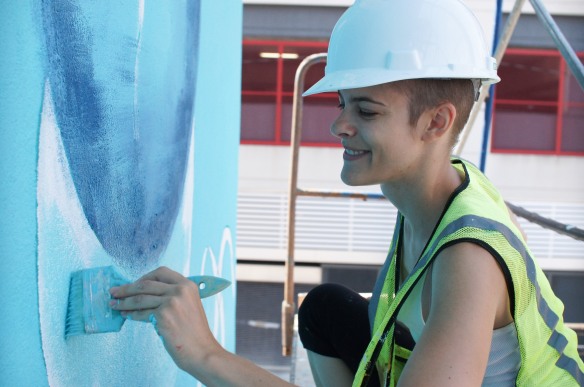 Roz Tallmadge is the lead artist for Newport Aquarium’s #SharkWall.

Featuring aquatic marine life from around the world – including a 25-foot-tall African penguin – the #SharkWall will bring the experience of Newport Aquarium outside the building. It will serve as a focal point for the Newport riverfront, seen by thousands each day from downtown Cincinnati, boaters on the Ohio River, visitors to Newport on the Levee, and pedestrians on the Purple People Bridge and Taylor Southgate Bridge.

Upon its expected August completion date, the #SharkWall will provide unique experiences from different vantage points. From downtown Cincinnati, viewers will recognize some of Newport Aquarium’s most popular animals. Newport on the Levee pedestrians will have an entirely different experience – discovering hidden treasures that only close examination will reveal.

Track #SharkWall Progress: Newport Aquarium is encouraging the public to take photos and post them to social media networks using the #SharkWall hashtag throughout the summer to help track the progress of the project.

About ArtWorks: Founded in 1996, ArtWorks is an award-winning non-profit organization that employs and trains local youth and talent to create art and community impact through three strategic programming areas: Public Art, including an extensive mural program; an art therapy division, ArtRx; and an entrepreneurial arm, Creative Enterprise.