Bravo in his new digs at Newport Aquarium.

When we are at work, a lot of guests ask us, “How do you get the animals at the Aquarium?” or “Where do the animals come from?” It is definitely a good question, and many people don’t realize that a lot of the animals are “on loan” from other accredited zoos and aquariums around the United States, and sometimes we have to travel to pick up (or drop off) these different animals. So Ric, Becky and I are on a trip to Tennessee, Georgia, Florida and South Carolina to drop off, and pick up, some of our amazing animals. And of course we end the trip with picking up Bravo, the more than 600-pound, nearly 85-year-old Galapagos tortoise! Over the next few days we will be posting about our adventure and sharing all the fun and unpredictable aspects of our trip!

Day 5: Finally heading home!
We started our day early by arriving at Riverbanks Zoo in Columbia, S.C. It is always hard to go to another zoo or aquarium and pick up one of their most loved animals. The keepers at Riverbanks absolutely love Bravo, and we were worried that they were going to be upset that we arrived to get him. However, they were absolutely wonderful about the whole process. Yes, they were sad that we were coming to get him, but they also knew that we would take very good care of him.

The whole process to get him safely in the truck was tricky. We initially thought that we could have enough manpower to lift him into the crate while it was still sitting in the truck. However, we quickly learned that Bravo is STRONG and we didn’t want to risk having him twist or move in a way that could compromise his safety. So we took the crate out of the truck and tried to have him walk in. He was able to walk out of his exhibit, onto the zoo’s pathway, but began to go check out the zoo in the other direction. Ultimately what we learned from this is that it is very hard to get a 600-pound Galapagos tortoise to do what you want them to do. It took a lot of people to guide him in the right direction and to scoot him into his crate. PHEW! Once we got him in, though, it was easy to get the forklift to place him back in the truck. Then, we moved him into place, tied the crate down so it wouldn’t move during transport, and we talked with the keepers for a bit before getting back on the road. 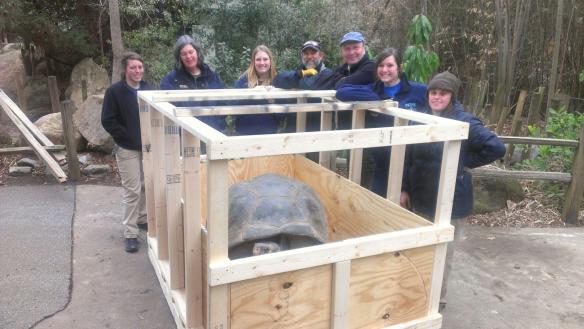 Bravo with Riverbanks Zoo and Newport Aquarium staff. The crate was filled with hay to protect Bravo from sliding back and forth before the drive back to Newport.

Fun facts we learned about Bravo from the keepers:
• He LOVES carrots.
• He loves to be scratched. Sometimes you will see him stand up tall and stay perfectly still, and that means he would like to be scratched or cleaned. In the Galapagos, there are birds that would help clean the Galapagos tortoises by pecking at their necks and shells, and they stand very tall and wait for the birds to land on them. Sometimes Bravo shows this behavior and he will stand very tall and still for a while.
• He was a part of one of the last shipment of Galapagos tortoises to come from the Galapagos Islands.
• He stayed in Hawaii for a little while when he first arrived in the states.
• About 15 years ago, they did genetic blood work on him to see what subspecies of Galapagos he is, and he is confirmed as a Galapagos from the Santa Cruz Island.
• Bravo “might” be a father. They have had eggs hatch a couple years ago at the Riverbanks Zoo (and I have pictures of the babies), but there is another male on exhibit with Bravo, which could be the father instead. There are theories that female Galapagos tortoises actually prefer less-dominant males, and Bravo was the dominant male of the group.
• His last weight was around 650 pounds!
• He recognizes each keeper’s voice.

We still had one more stop before we could bring Bravo home… Knoxville Zoo! We had to pick up a couple new spider tortoises. So we stopped there for about 15 minutes, chatted with the keepers about their conservation efforts with their animals, and then got back on the road. We wish we could have stayed longer. 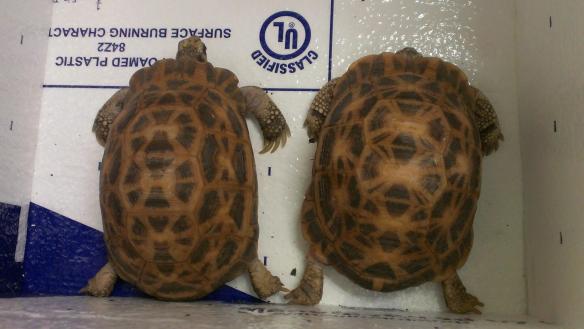 Everyone we have met along the way has been so helpful, interesting and welcoming, which makes it hard to get back in that truck! But we moved on and ended up making it back to Newport, Ky. by 8 p.m. Then we had to unload, which was a completely different experience. Luckily, we have some great staff who welcomed us home and helped get Bravo safely in his new home.

Come see Bravo when Turtle Canyon opens on March 22! Until then, our keepers here will be helping Bravo adjust to the Newport Aquarium.