Penguins silhouetted against the sunset.

Hello from Peru! As I mentioned in our last post, we were having internet issues. This wasn’t exactly true. We were having issues getting into the house that has the internet… So, using internet was difficult sitting outside in the cold Peruvian winter. 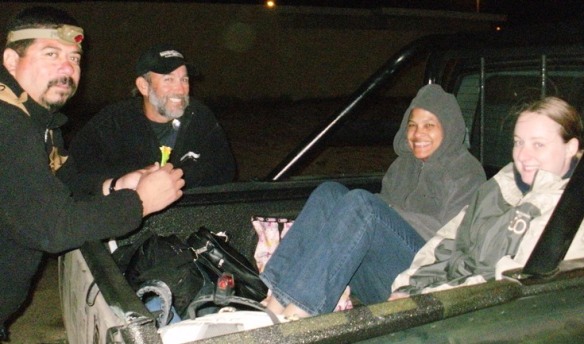 Waiting in the truck for Alle to break into the house. It’s chilly out here when the sun goes down.

Every day, half of the people here get to go to this small house outside of la guanera and use the internet and have a warm shower (yep, there is no such thing as a HOT shower here…), and when we went to the house yesterday, we were locked out. Unfortunately, someone had locked the lower part of the door, which is a problem since no key exists for that part of the door. So after receiving permission to break and enter, I used a hammer and a small prying knife to pop the lock and get us into the house (and then I temporarily fixed it when I was done, too!). It took us about an hour or so, but we got some fun pictures along the way! So it took us a while to get in, and then after a small black out, we decided to give up on the blog for the night and head back to la guanera.

B+E skills come in handy out in the field.

So here we are back on la guanera, and we have already finished our morning counts for the day. We went to the different beaches around the reserve and collected census data on los pinguinos (the penguins), and also on los lobos marinos finos (fur seals), and los chuscos (sea lions). We will be heading out here soon to do the rest of the counts for the afternoon, and hopefully we will get some big numbers from the penguins!

Ric and I were talking today with Alonso, the penguin expert here at Punta San Juan who is responsible for all the penguin census data and active nest data. He is truly an amazing person who is extremely passionate about conserving these birds. He told us that at the beginning of July there were more 1,400 active breeding nests in just one small section of the reserve! In the entire reserve there are over 1,600 breeding nests.  This information gives him an estimate of more 2,000 fledgling penguins in the reserve alone, and an estimate of 4,000-5,000 penguins in the entire Punta San Juan area. That is a lot of penguins!

Alonso was also mentioning that he feels that the count of active breeding nests would be higher if the wall that protects the reserve could be longer. The wall helps to keep predators out and keep the disturbance from the town low. Alonso discovered that some of the penguins like to fish outside the reserve, but they will not nest outside of the reserve because they feel unsafe. This is unfortunate, because penguins like to nest near a good food source because the amount of food available tends to alter the nesting ability/breeding of the adults. More food = more energy for breeding = more penguins.

We will update some more later this afternoon and let everyone know how the penguin counts are. The area we are heading to is the area known for nesting, so we will be seeing a lot of penguins, and hopefully lots of chicks and fledglings.

PS. Ric and I have quickly discovered that peanut butter is like GOLD here on the reserve. I had a small jar of peanut butter and some crackers packed in my bag for a snack, and I got it out this morning for breakfast… I suddenly became EVERYONE’S best friend (including the dog, Conhom – which translates to “with hunger” since the dog is always hungry…). We all sat around laughing, joking and eating peanut butter like we haven’t had access to food in weeks! So we dubbed our breakfast “a peanut butter party” and decided that JIF Peanut Butter needs to sponsor us for penguin conservation since all the biologists love it so much and it is so hard to come by here in Peru. So what do you say, JIF? Penguin Biologists LOVE your product both in the USA and Peru!

(Editor’s note: We’ll make sure the JIF people see this.)