This is Alle typing, but Ric is right next to me! We left Lima, Peru late Sunday and took a bus to Marcona, Peru, arriving around 6:30am (7:30am Newport, KY time).  I slept most of the bus ride, but Ric and some of the other people with us witnessed the transformation from populated city to coastal desert.

This sign at the entry to the reserve reads “Peru Ministry of Environment;
National Service of natural areas protected by the state. National Reserve; System of guano-field islands, islets and points.
Punta San Juan.

We arrived at Punta San Juan around sunrise, and had breakfast and got to know our new friends. The landscape is amazing. If you were to imagine the landscape of the moon or mars, that is what it looks like here. There are no trees or grass anywhere. All you can see is sand and guano. The sound outside of our house for the next two weeks comes from waves crashing on the shore, fur seals, sea lions, gulls, terns and of course penguins. Ric says it is not a vacation, but it definitely sounds like one!

However, once you walk away from the house and get closer to the animals, the smell is what hits you. Feathers and bones litter the earth, and remnants of old life haunt the terrain with abandoned nests and stale guano. It is a combination of all of these things that makes the smell  unique. The debris around you can alter to the smell from bad to worse. It is the type of smell that you would normally get used to after a while, if the wind didn’t keep changing its intensity. But overall, the smell doesn’t really affect a bunch of Zookeepers. 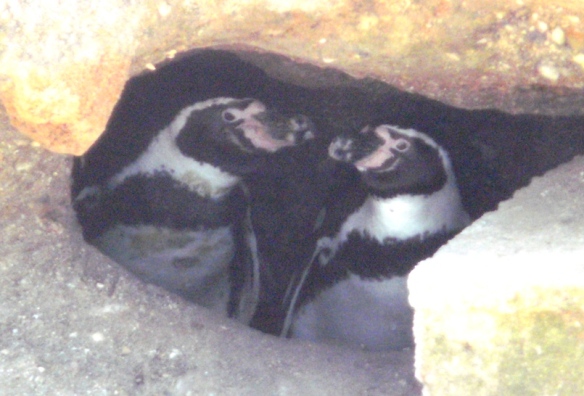 We were walking the guano reserve and found these two Humboldt Penguins hiding from us in a nearby cliff.

Day 1 was our Orientation Day.  We walked the coastline of the 133-acre reserve watching cormorants flying in from their sunrise feeding on the ocean.  Fur seals and Southern Sea Lions compete for space along the beach.  A bachelor group is formed beneath our home base, while the females and young are on the beaches around the point.  The largest group of sea lions and seals can reach 7,000 animals on one beach.   Penguin nesting colonies are spotted on top of the cliffs and you can see their paths leading down to the beaches.

Volunteer monitors look out over the Pacific Ocean. (Ric is on the far right with the baseball cap and black backpack.)

Tomorrow we are going to be working on counting the populations and watching the interactions between the penguins and the seals and sea lions. We will be waking up  around 6 a.m. to start counting, and we will have another update for everyone tomorrow!